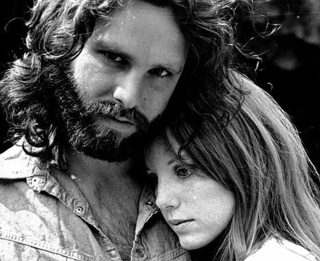 Love him or hate him, Jim Morrison is surely one of the most enigmatic classic rock band front men of all time. Right from the formation of the Doors in 1965, he was always the center of attention for the Doors, sometimes for the wrong reasons. Indeed, he quickly grew many critics in addition to his adoring fans for some of his antics and actions, on and off the stage. His upbringing certainly had a big impact on his life too, where his dad quickly alienated him for not joining the navy.


Jim Morrison certainly had two sides to him - the acid fueled drunken/high, rock and roll womanizer that we see in the Oliver Stone Doors movie and some of his live concert footage. He often got way too high and drunk to sing or record music, and regularly verbally abused his fans on stage. And by the time of this death, there were allegedly over 20 paternity suits filled against him from his many one night stands with his groupies and flings.

His other side is the romantic, poetic, song-writing genius that we read about in many of the great Doors books like 'Riders on the Storm' and 'No One Gets Out of Here Alive' and through his poetry. Jim Morrison was also responsible for the lions share of song writing for The Doors. A great fresh perspective of his poetic, intimate side can be found in this book by his teenage love Linda Ashcroft (although some consider has elements of fiction in it).

His life certainly turned to a darker side towards the end of his career in 1969, increasingly getting in trouble with the law (including his alledged indecent exposure on stage in Florida that he was recently pardoned for) and other harder drugs. His appearance began to suffer too, putting on too much weight and growing an almost homeless-like beard. When he moved to Paris with Pamela Courson he tragically died in a bathtub from a heroin overdose - way too young.

Personally I think he was potrayed too much as the stoner/drunk womanizer, and not enough emphasis on the genius poetic song writer and front man that he was. I think had he lived beyond the low point towards the end of his career, he eventually would have got his act together again and created even more amazing works of musical art. And if you watch the rare video of him playing piano below, I think it sums up the different sides of him pretty well.

What are your thoughts on Jim Morrison? Comment below so we can all know what you think too...

There's a fine line between genius and insanity and most highly artistic people suffer from some sort of mental anguish.  Jim Morrison was definitely brilliant and ahead of his time, but sadly, the drugs and alcohol overtook the genius within.

Simply put, I believe he was a poetic genius and a drunken womaniser. Don't get me wrong I would love to be like Jim Morrison. All I've ever managed though is 'drunken.' Still, 1 out of 4 ain't bad.

Poetic genius for sure.  Oh sure he was quite the drunk...and the womanizer.  But it takes a lot more than drugs, booze, and women to write what he wrote.  His work is beautiful.  Breathe taking.  Interesting.  Not every drunk womanizer can write like that.