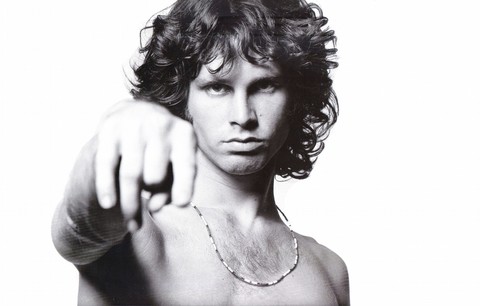 Yup, you read that right. Jim Morrison was the greatest frontman of all-time.

Now, before all of Beatle-mania and the Kiss Army (or which ever band your loyalty lies) gets all worked up, just hear me out.

Jim Morrison meant more to his band than any other musician. The Beatles had Paul McCartney, George Harrison and Ringo Starr to go along with their great frontman, John Lennon. All of which had very succesful solo careers. Meaning they probably would have made it big with or without Lennon.

You could really say the same for Jimmy Page and Robert Plant (either one could be considered their frontman) with Led Zeppelin. Hell, Jon Bonham may be the greatest drummer of all-time. John-Paul Jones may also be the best bassist to ever strap on a bass. Both the Beatles and Led Zeppelin's other members are just as famous and meant as much to their respective bands as their leaders.

The Who also had more than just their frontman to take them to that next level of greatness. Pete Townsand (guitarist), Roger Daltery (lead singer) and Keith Moon (drums) are all considered rock n' roll gods. They were all one of the best at what they did. John Entwistle was even a great bassist in his own right.

That brings us to the Rolling Stones. Although one could make an argument for Mick Jagger, he had Keith Richards. Keith became just as big of a star as Mick. Some may even say Keith is the more famous of the two. I, personally, believe that Mick is the heart and soul of the Stones. But that's a debate for another day.

Now, this is by no means trying to put down the rest of the Doors members. Ray Manzerek played an unbelievably good keyboard. Robbie Krieger was an excellent guitarist and song writer (he wrote 'Light My Fire' to go along with many others). John Densmore's skills on the drums are as good as anybody's in rock. But Morrison brought this karisma that the rest of the band needed to become great.

When Jim was on that stage everyone's eyes were glued to him. You didn't want to miss what the karismatic, out-of-his-mind Morrison was going to do next. All the big celebrities of the time, musicians to artists to movie-stars to writers, wanted to party with the Lizard King. People just seemed to gravitate towards Jim. He was a smart, funny, good-looking guy. He had that 'I don't give a fuck' attitude mixed with a very caring heart, for the people close to him, that made women want him and men want to be him.

I haven't even mentioned what made him so great in the first place: his song and poetry writing. Jim's words spoke to people and really made you think in ways you never did before. He touched on love, death, war and everything in between. He could touch your heart and make you think of your true-love with a song like 'Moonlight Drive'. Then make you think about tragedy and war with 'Unknown Soldier' and 'Peace Frog'. Next thing you know you're singing along with a song that can be interpritated in so many different ways like 'The End'.

Mr. Mojo Risin' lifted the Doors to heights they never would have accomplished with out him. All the great rock n' roll bands throughout the years have had a Batman and Robin. Hell, even Aerosmith had Steven Tyler and Joe Perry. But when it comes to the Doors most people can't even name another member of the band. I know most of you on this site can, but I'm talking about the general public, your average run of the mill fan.

I know a lot of you have your own opinions and I'd love to hear them all. But this is what I think. So tell me, my fellow classic rock nuts, who's your favorite frontman?

Wow - fantastic article Mike! Great writing, and I have to agree with you - most major classic rock bands had at least 2 frontmen - and one you missed was Pink Floyd who also had two main front men. I agree that the Doors would have gone nowhere without Jim Morrison! If i had to mention a few other great standalone frontmen, I would have to say Freddie Mercury, Sting and Jerry Garcia...

Expert RockerPermalink Reply by Mike Pratt on August 1, 2012 at 9:13am
I can't believe I forgot Pink Floyd!! That's one of my favorites

Expert RockerPermalink Reply by Linda Stephenson on August 1, 2012 at 10:42am

You also forgot Ozzy Osbourne, and I must be the only one who has never found The Doors to be anything special.  The only thing that might have made Jim Morrison stand out from most other frontmen was his looks, I had always thought him to be gorgeous and I liked quite a few of their songs, but that's as far as it goes for me.  I believe to be a truly great frontman you have to be known and well liked by a wide range of people, from the very young to the very old - my friends daughter (11) loves the music of Led Zeppelin and Robert Plant, together with my mum (82)! who also loved to listen to Freddie Mercury, and Roger Daltrey (Ozzy she wasn't too sure about. Ha ha)  I don't really think their is such a thing as 'the greatest frontman' as their will always be one that is very well known and more identifiable than another either because of his looks or his voice, but not necessarily greater,  at least to you....

Expert RockerPermalink Reply by Linda Stephenson on August 2, 2012 at 10:22am

He was a very pretty piece of 'band candy'!

If you are in an argumentative mood Amstell, then learn how to spell Ray's last name ;)

Expert RockerPermalink Reply by Mike Pratt on August 2, 2012 at 8:37pm
The way you spelled it was way off and Morrison was anything but overrated

Expert RockerPermalink Reply by Mike Pratt on August 6, 2012 at 5:31am
Yea well, you weren't even close

How can Hendrix, Elvis and SVR be frontmen of bands that were all about them?

Expert RockerPermalink Reply by Mike Pratt on August 2, 2012 at 8:45pm
No you don't which i mentioned with Zeppelin. But they weren't in bands, it was solo acts with background musicians. A HUGE DIFFERENCE!!

Expert RockerPermalink Reply by Mike Pratt on August 6, 2012 at 5:33am
Seeing as their band name was named after Stevie Ray and Hendrix I'm sure they knew their role.

Expert RockerPermalink Reply by Mike Pratt on August 8, 2012 at 5:55am
Exactly their name was STEVIE RAY VAUGHN & the Double Trouble, now who's band is it? The band Henrix is most known for is the JIMI HENDRIX Experience. Nice try though.

Expert RockerPermalink Reply by Mike Pratt on August 6, 2012 at 5:03am
How is Elvis not a solo act?