Who is better? Led Zeppelin or Black Sabbath?

A huge question indeed! And a very popular one! This was posted as a question on our Facebook Fan page earlier, and it got 32 responses in just one hour! Take a look at some of the great responses: 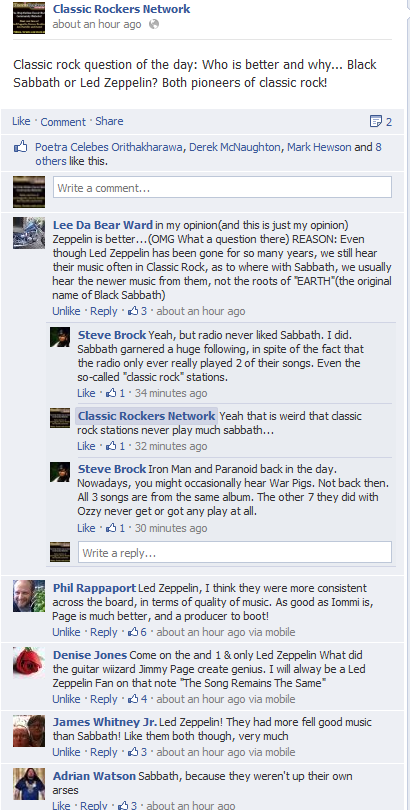 So who do you think is better, Led Zeppelin or Black Sabbath, and why?

Led Zeppelin, they are not Black Sabbath(and I do like Sabbath)

Nice topic Rich. I have a hard time saying anyone is better. I love Zeppelin but also love Black Sabbath. I would have to say I like zeppelin better for this reason.... If I was offered a ticket to a concert and had to chose between Zeppelin and Sabbath. Easy decision  - ZEPPELIN.

I don't own one single Black Sabbath track (unless it's on some rock compilation album someone has bought me), whereas I have all Zeppelins. Enough said....P.S. I don't like Deep Purple either!!!

I think that Led Zeppelin is better!  BUT it's hard to compare them in many ways cuz they really play different types of music...this is a good debatable question!!  And the Lyrics of each band's music are very different from the other's.

yes now I know what you mean...Black Sabbath didn't have any Masterpieces whereas Led Zeppelin had several to be sure!!  I wasn't even looking at it that way!

Well I think the argument of which is better is really subjective. The music they produce is very different.  In terms of individual talent, I wish to offer this critique:

Bass - Geezers base playing is superior.

Drums - Bill Ward is the better drummer (what Zep song can you compare to the drumming on the wizard).

Guitar - Page's style is sloppy and his solos dirty.  If you heard a kid playing like him you would tell him to go practise some more.  Iommi has missing  finger tips, and uses alot of effects to compensate.

Song Writing - both produce some pretty good music - sympthom of the universe, Over the hills and far away, etc.

Live Perfomances - both packed concert halls, even now, if the remaining members tour they do very well.

Influence - In the 80's and 90's many new bands listed Zep as their influence. from the 90's to the new millennium Sabbath is the greater influence.

Solo Projects record sales and projects - Ozzy had more success with his solo projects that Plant (I often wonder if that was because of his great manager - sharon, than his abilities. That is not to say that he doesn't produce great music). However, Plant and Page often have great collaborations with other artists. Radiation, Honeydrippers, et al.

Are you for real?? Whatever you are on I'll have some, maybe it will make me listen to the smackhead, dope filled, drunken Ozzies records. Then again NO, no amount of alcohol or drugs would make me think that Black Sabbath were better than Led Zeppelin. Bill Ward the better drummer !!!!!! You should go and see someone about either your hearing or your delusions. Led Zeppelin 1 Black Sabbath 0.......Next !!!

That says it all!!

If you go strictly by sales than Zeppelin wins hands down. Yes Sabbath has it's cult followers and fans too..I even have their first couple albums (well cd's now) but Zeppelin was the 70's in my opinion.

Yeah I agree!!  Led Zeppelin was the #1 touring Band in the 70's.  And their concerts were a big deal too!!  What other Band did 7 soldout nites at the Forum in LA?  The only other one was the Rolling Stones!  Led Zeppelin accomplished this at least 3-4 yrs in a row and also played at the Long Beach Arena in Long Beach, Ca. (probly on their off nites at the LA Forum)!

Shirley possibly in Cali but in the rest of the world the Stones were bigger draws.In England and Europe UFO had better record sales then Black Zeppelin which would be a cool name for a new monster band lol By the way I love them all and criticism is basically a different form of input advice suggetions and all good. I realize that now I never did when I was young and look what was created lol Have a good one everybody