(From "BABYSITTING A BAND ON THE ROCKS"

- available at Newbury Comics locations throughout

the Northeast and online at LTCDS.com > Webstore > Books).

"For Kath, this was not just another Sunday; she was poised
to lose all control as Ed was about to introduce the Beatles for the
very first time. Like most young girls her age, Kath had heard that
the Fab Four were all the rage, and she had worked herself up for
this night since the day that Ed had announced it. The center panel
of her desk that doubled as a vanity lay open to utilize its otherwise
hidden mirror; Kath had been primping as if the lads performing
tonight would actually be able to see her in her bedroom all the 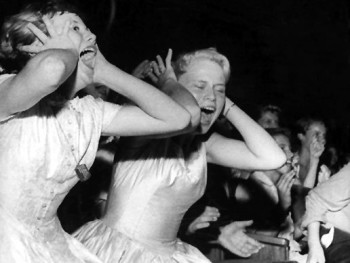 way from the theatre at Broadway and 54th.

When John, Paul, George and Ringo hit the stage you’d think it was the Second Coming. No, I take that back; Jesus himself would not have received such a rapturous reception. (John later said so, himself, and caught a lot of **bleep** for it.) The sea of screaming girls that packed Ed’s studio rendered anything the Beatles played virtually inaudible, and Kath screamed along with them, as I
imagine was the case all across America. They say that more than 70 million of us were watching. Bill and I covered our ears while our parents studied our sister with fear and disbelief.

“I really don’t see what all the fuss is about,” my Mom blurted with exasperation once The Beatles had finished “She Loves You,” the final song of their opening set. “They’re just a bunch of mop
heads making loud music!”

“You call that music?” Dad chimed in with disgust. “Now
Glenn Miller, Sinatra...that’s music. And these guys look like a
bunch of girls!”

My fourteen-year-old sister turned to scowl at their
objections, brie y ungluing her attention from the TV but
remaining speechless, unable to respond to my parents’ disparaging
comments about her newfound obsession.

My brother and I? We looked at each other with “What the
hell was that?” in our eyes, but we not-so-secretly wished we could
do it, too. Making noise and making girls scream was easy. But to
make them love it? It couldn’t get better than that..."