""Heres a song that i always loved.I heard the stones first but actually like Aerosmiths better or Rufus Thomas which I sent originally wrote it and its not only about the dog and the Stones were my 1st listen aerosmith were my most familiar version 7 do you think Rufus and its popularity as a dog alias is connected anywhere lol I wouldnt change anything well this little heathen is driving me mad he leaves things behind like babies do do do lol but hes my little heathen lol replying to this so you all dont think Im nuts i am anyways lol Yah... aren't dogs great! A
couple friends had Rots... great dogs, and the cutest
puppies ever. They're rolly-polly, and love to
play. Dogs are so loyal, and what you put
into their training is what you get out. Hey, assuming
you plan to keep the dog for life, no problem getting as
close to the dog as you can. If you do get really
close to a dog, you have a big commitment. It's a
life-long relationship. Once you build that bond, it's
not fair to the dog if you desert him. You know, once
your dog is full grown he would die for you... that's a big
responsibility. My time with the five Doberman (after
I found a home for the one male pup) completely changed my
life, though. First off, the dogs were the reason my
ex-wife and I split up, and after 10 years. She was
right about one thing, though... the dogs dominated our
lives. We stopped going out after work...had to go
home to let the dogs out, right? We couldn't have
people over anymore, except those few really close friends
and some family. Not to mention the cost of raising 5
dogs. They did a number on the house, too. And
then, the Dobies were very demanding of our time.
Then second, they became more important than my job, my
other hobbies and even my music. I basically stopped
playing. The dogs got used to my schedule; so
any time I left for anything unscheduled the dogs would howl
when I left. My babies would miss me. But, like
I told you, I still dream about those dobies, after 20
years. Can you believe that?
Get some work done. No music today...but, probably
later tonight.
Later.
j

yeah the best part about him. I don't have to take him out for walk and he never gets hungry ;)

Comment by Glen Pfab on October 3, 2013 at 7:46am
thanksK hes sure a hip hugger type weinner dog talking about hip hugger Im gonna post another oldie from the Memphis music mafia booker T-MGs & use this to kill two emails at once Have a good weekend! 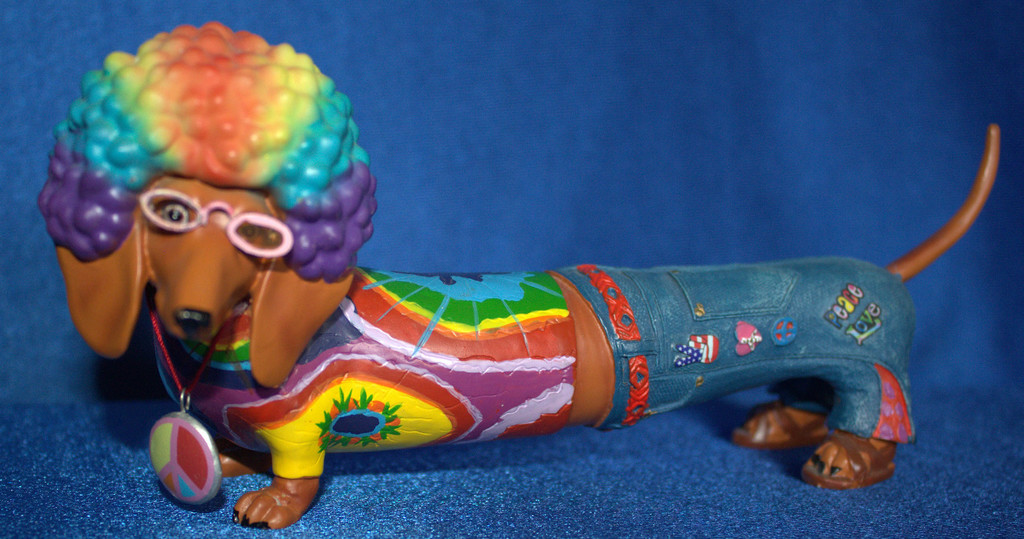 I actually found this the other day in one of my boxes my storage room.  Have no idea where I got this. Later Glen..

btw nice share from rufus. sounds like your busy glen and hope things are going well for you in life. I had a beautiful doberman named "gypsy" when I lived in cal. She was a great protector.. They are amazing dogs. Yeah dogs are a lot of work and can't imagine having that many. ;) Sorry it took me a while to comment here my friend. I have been so sick and on a new drug for the lupus. I feel like i am being poisoned here on a daily basis. Hoping the side affects will eventually diminish so I can be more active and not sick all the time. It is an Antimalarial drug and I will probably be on this one for the rest of my life. They are monitoring me closely and I am hearing a lot of good things about the treatment.. you have a wonderful day/night.. PEACE