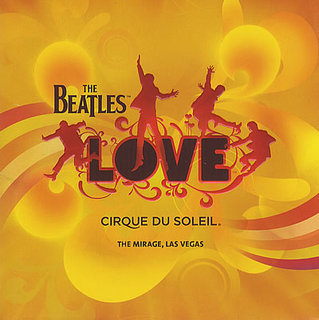 Opening in late 2006, the magic of Cirque du Soleil was gloriously bought to the world of Beatles music. 'Love' is joint collaboration with George Martin (the old manager of the Beatles) and Cirque du Soleil, and is the resident act at the Mirage casino and hotel in Las Vegas, Nevada.

I first saw the Beates 'Love' Cirque du Soleil show back in 2007 and was just blown away. Truly mezmerized. This was hands down the best audio/visual experience I have ever seen in my life - even better than any live concert i've seen before, even involving the audience at certain parts. I recently saw it again and I was just as blown away.

The opening of 'Love' is just phenomenal, starting with a haunting, starry version of 'Because' then coming alive with the formation of the Beatles to 'Get Back' (during a backdrop of the blitz). It then goes on to tell the tale of the rise of the Beatles to become superstars. Personal favorite highlights of mine are 'Get Back' (which I managed to catch on video below), a breathtaking ballet-like version of 'Something', and crowd eveloping 'Within Without You'. The show ends with spine tingling version of 'Revolution', and leaves you wanting more... and to see it again!

For any serious Beatles fan, The Bealtes 'Love' Cirque du Soleil show is worth a trip to Las Vegas alone. And even though it's not cheap (expect to pay around $100 at least per ticket) its certainly worth it. You even get to hear some previously unreleased versions of songs, including a studio version of  'While My Guitar Gently Weeps'... so what are you waiting for? Head out to Sin City and grab some tickets - you certainly won't be disappointed.

I have seen the show 3 times at The Mirage. As a member of the MGM "M" casino group, i get invited and compted a great deal. Usually 3 nights, the show, and most of my meals. I am so glad that it's "Theatre in the Round" because the action is literally everywhere including the seating area (the white sheet) and the aisles. I'll go back in July and plan to see the show again if it's still there. I would hope so.

In 2011 Paul, Ringo, Olivia, Yoko and Sean all appeared at the 5TH Anniversay along with George and Gillies Martin