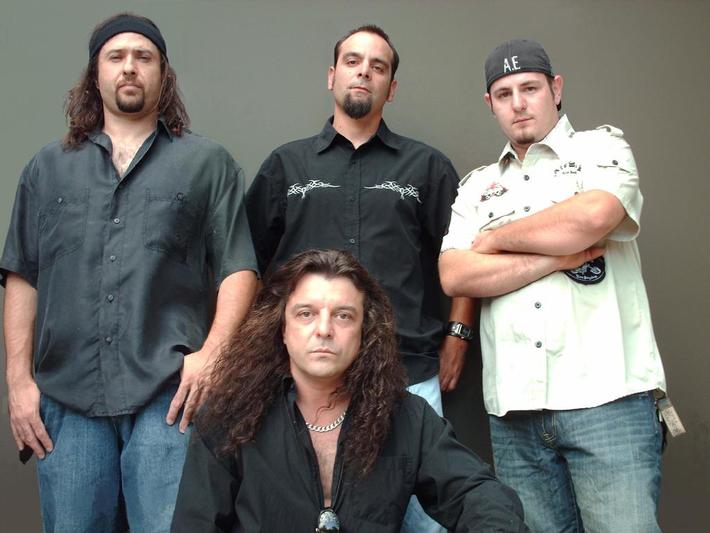 Band That Got you into Classic Rock
Led Zeppelin

Top 5 Classic Rock Songs
Dazed and Confused, Burn, Heaven and Hell, For those about to rock, Celabration Day

Along with bass player Carmine and drummer Darryl Brown, being the meat and potatoes of Stir Of Echoes, is fast being recognized as a pulse pounding hard rock groove driven dynamic duo generating a record full of rock and roll at its finest.

With standout tracks like "Sentimental and Sold it all to fame," the music of Stir Of Echoes appeals to rock fans and non-rock fans alike. With their combined experience and knowledge of the stage, Stir Of Echoes has set a precedent and endeavour to always break new ground.


RAY D'AURIA
Vocalist
Ray D'Auria has enough energy to power a small fleet of motor vehicles. It's a fuel that burns full-throttle, ignited by the heat of his soulful voice and the power and passion of his performance. His style is unique, and has been honed over the years to what has now become the vocal force and unmistakable presence of Stir Of Echoes. Ray was introduced to Marco Ciardullo and Darryl Brown through his cousin and bass player Carmine. The chemistry amongst the members was immediate and the dynamic of Stir Of Echoes emerged.

MARCO CIARDULLO
Guitarist
Marco brings a rooted energetic refreshing sound of overdriven but bluesy tones that covers everything from yesterdays classics to today's new rock. He has been influenced by such acts as, Led Zeppelin, Deep Purple, Chuck Berry and the likes of Jimi Hendrix. Born and raised in the "Hammer" this guitar player knows no boundaries.

CARMINE
Bassist
Carmine is a groove crazy bass player that cut his teeth on the British blues rock explosion scene. His musical style transcends over two decades of relentless exploration of traditional blues, rock and roll, motown and funk. He's been influenced by past and current artists, but its apparent from his style and technique that he has the rare feel of such heavy weights as, Jack Bruce, John Entwhistle, and John Paul Jones.

DARRYL BROWN
Drummer
Darryl is a hard hitting, solid, groove based drummer who was influenced by such bands as AC/DC, Motley Crue, The Stray Cats, Nazareth, Deep Purple, and Led Zeppelin. Darryl has toured across the country and has been performing live since the age of 12. He has a very diverse musical background, having played many styles of music, from classical & jazz to hard rock & heavy metal. Darryl's presence is eager, energetic, and explosive and he has teamed up with a group of musicians that finally share the same musical taste.

Just thought I’d let you know that we are now selling our demo via some of the most popular online music stores in the world.

You can now go to any of the below listed online stores and purchase the album itself or just buy your favourites, one at a time.

So far we've had overwhelming support and we must give credit to where credit is due! We want to thank all of our… Continue

DrumT said…
Excellent! You clearly loved and believed in the rock you grew up with. It shows in your tunes. Good luck.

Alan said…
You guys have the talent, the potential, and you have a kick ass rock band. It depends on what you want. If you want world class fame you need a producer. Someone you trust to tell you the truth, someone to help with your direction.
If there is one thing that I learned from the bands of the sixties it was their spirit that brought me back for more! If you want to know more about where I'm coming from please check out my web site: http://www.slowtrainumber9.com/ If you come to Cleveland please let me know and I will be there!

glen pfab said…
Cool you guys got a good sound just keep chasing your dream and you will be alright!! Regards glen

ledzepzoso04 said…
Hey Thanx for the request..... awesome sound!
You guys ever make it to the states??

Ladine said…
Hi Ray!! To say the least I'm so so happy for all of you. I know it's been a long trying road....but you guys DID IT lol!!!!
I can't wait to hear the whole album as I already have a fav song. Gives me goose bumps when I listen to it ;) And I look forward to seeing the band and watching you sing it!! SUS

Ladine said…
Are you gonna be playing in the Oak/Burl area any time soon?

CindyLouWho said…
thanks for adding me. love your music. my computer is takin a vacation in it's head right now, so will catch ya in just a little bit.

stirofechoes said…
Hi all!
Please check us out at...
www.myspace.com/stirofechoez