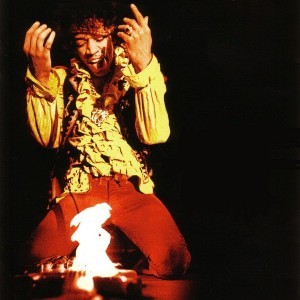 November 27, 2012 marks Jimi Hendrix’s 70th birthday.  This man single-handedly changed music Forever. It’s beyond me to even comprehend Jimi Hendrix at 70 years of age. Out of all the famous performers that I have seen live only one stands out above them all and it is Jimi Hendrix.  I feel grateful that I lived In Los Angeles in the 60’s and was able to see this amazing man so many times in person. Perhaps no other rock-and-roll trailblazer has been as original or as influential in such a short span of time as Jimi Hendrix.

Widely acknowledged as one of the most daring and inventive virtuosos in rock history, Hendrix pioneered the electric guitar (he played a right-handed Fender Stratocaster upside-down and left-handed) as an electronic sound source capable of feedback, distortion, and a host of other effects that could be crafted into an articulate and fluid emotional vocabulary. Jimi literally made his guitar talk.  For a man who could not read music and played the guitar with his left hand he showed what talent and determination can do. They did not make guitars for left handed guitar players at that time and he just strung the guitar strings backwards so he could perform.

Although he was on the scene as a solo artist for less than five years, Jimi Hendrix is credited for having a profound effect on everyone from Miles Davis to Stevie Ray Vaughan. Eric Clapton has stated that after seeing Jimi Hendrix the first time he knew that he, Eric, didn’t hold a candle to the talent of Jimi.  In the few short years that he obtained superstardom he has never been forgotten.

Jimi came from a background of a black American of African, European, Cherokee Indian and Mexican descent. An unsettled home environment made Jimi spend much of his early years staying with his grandmother, a full-blooded Cherokee, in Canada. Jimi took care of his little brother with very little help from his father as his mother had passed away when he was only ten years old.  At the age of seventeen he left and joined the army, where he served as a parachute jumper until he broke his ankle and was honorably discharged.

Aside from playing the guitar behind his head or with his teeth, Hendrix was renowned for setting his instrument on fire during his performances. The first time he set his guitar ablaze was on March 31, 1967, during a show at Finsbury Park in London. That year also marked the release of his first single, "Hey Joe," which went to #6 and lasted ten weeks on the U.K. charts. It was followed in quick succession by "Purple Haze" (#3), "The Wind Cries Mary" and the trio's ferocious debut album, "Are You Experienced?” which featured those tracks and the Hendrix staples "Foxy Lady" and "Manic Depression."

Hendrix's popularity in the United States was a bit slower in igniting, but "Are You Experienced?" finally broke through in a major way after a defining moment at the famed Monterey Pop Festival, in June of 1967, when the notoriously outlandish frontman created a sensation by coaxing flames from his Stratocaster during the band's performance as a sacrifice for the audience. Throughout the next year, Hendrix's eclectic psychedelia reached a zenith with two albums, "Axis: Bold as Love" and "Electric Ladyland" - the latter ranks as one of the greatest albums of the rock era.

He was recognized as the greatest guitarist when he was alive and one can only glimpse what might have been his future had he lived.  There’s no question that he would have advanced musically beyond what he had done previously.  So much of the music performed today would not exist were it not for the groundwork that Jimi Hendrix laid for those that followed after him. He perfected the use of the wha-wha pedal that alters the tone of guitars and to boost certain frequencies. Jimi’s wah-wah Style utilized a percussive "wacka-wacka" effect by muting strings and moving the pedal at the same time. The first time this was ever done was on the song “Little Miss Lover.”

His connection to the audience was so powerful and you felt like every note he played was just for you. I always think of how he came out smiling and how he always exited the same way, smiling. There were no fancy sound systems; yet, his music was so powerful he didn’t need what is used today to convey his music.

Orchestras have performed some of his songs and I often think how blown away Jimi would have been to have heard his songs done by famous orchestras.  Perhaps he would have formed an orchestra himself.  He certainly had the talent and the gift to do anything that he put his mind to.

Jimi never owned much of anything during his life as he traveled almost 50 weeks out of the year and what little free time he had he spent in the studio recording.  He never was able to settle down into one place.  He called himself a “Highway Child” and that was certainly a good description of what his life was.  He did not leave a will and it took many years for his father to gain rights to his estate and it eventually passed to his brother Leon.

Located in Seattle Washington there is a beautiful exhibit called the Experience Music Project with more than 8,000 Jimi Hendrix artifacts in its collection.

Some may say that Jimi Hendrix burnt out, but to burn out you have to first be on fire, and my friends this man was on Fire!

For a gentle man who only lived 27 years he changed the face of music and performing for ever. I know that where ever you are Jimi you are still making beautiful music and smiling.  And you certainly did live your life the way you wanted to!

Ed it is so true, so many people not just young people, do not listen anymore to Jimi and what he had to say and convey with his music was powerful and filled with beautiful emotions.  Today let’s remember him and let the music continue.  Many blessings, Cherokee Billie

Not enough young folks listen to Jimi. I think that, if more of them did, it would really open up their minds to see how beautiful music can be, and maybe today's music would improve.